Speaking to the German weekend newspaper Bild am Sonntag, Tikhanovskaya revealed her belief that both external and internal pressure on the long-time leader will lead to his replacement.

“We hope for a strong alliance with the new US administration and the EU. Pressure will increase day by day, and at some point, it will become too much for Lukashenko, and he will leave,” she said.

“The Lukashenko regime will fall this year. I think he will be gone in the spring,” she noted, claiming that the president is only keeping his power by force and violence.

However, Tikhanovskaya admitted that Belarusians are rather pessimistic about a possible change in leadership, with it appearing that nothing has changed in the six months since protests started last summer.

Belarus’s presidential election took place on August 9, with the official results naming Lukashenko as the victor with 80.10% of the vote for a sixth term in office. Tikhanovskaya was his closest rival with 10.12% of the ballot, although her supporters believe the vote was rigged and she is the true victor. Prior to the election, Tikhanovskaya was not involved in politics and only stepped into the limelight when her husband, Sergey Tikhanovsky, was sent to prison. 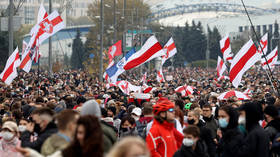 When speaking to Bild, the former presidential candidate vented her frustration with the EU for not imposing stronger sanctions on Minsk. Tikhanovskaya now lives in the EU herself, in exile in Lithuania, but says she wishes to return to her home country as soon as she gets assurances that she will not be imprisoned.

Following the election, street protests erupted throughout the country, especially in Minsk, the capital. Demonstrators were met by the police with force and tear gas, eventually leading to the marches petering out. In the time since, the EU has imposed three sets of sanctions on the country, singling out 88 influential individuals who are now banned from entering the EU.