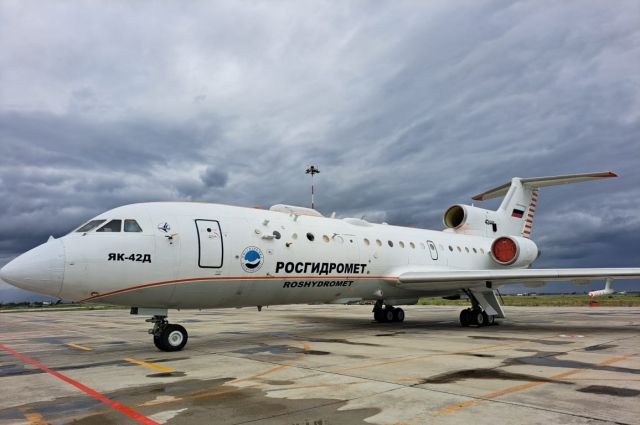 Since May, the Central Aerological Observatory of Roshydromet has been operating in the republic, and it was in the depths of this department that a technology was developed that allows you to control the most complex natural phenomena in order to reduce the fire hazard class in the forests. Bagrat Danelyan, the head of the department of cloud physics and active effects of the Central Aerological Observatory of Roshydromet, the head of the expedition in Yakutia, Bagrat Danelyan. — Bagrat Grigorievich, please tell us about the progress of work in Yakutia in this fire season.

— Works on artificial increase in precipitation were aimed at moisturizing fire hazardous areas to reduce the fire hazard class. I want to note that such work was carried out in our country for the first time and became possible solely due to the initiative of the head of the republic, Aisen Nikolaev. Before this technology was used only for the purpose of firefighting.

Together with the republican rescue service, we compiled the work of the Yak-42D and An-30M laboratory aircraft. The document was developed on the basis of long-term predictive analyzes of cyclonic activity on the territory of the Republic, made by Roshydromet, and also taking into account the long-term fire forecast of Avialesookhrana for 2022 year.

During the experiment, 27  sorties, more than 130 hours worked, more than 3000 squibs fired. The work was carried out at requests from the rescue service of Yakutia, mainly in the central, southwestern and southeastern parts of the republic. — How is the work on causing artificial precipitation?

—  It is important to emphasize that the technology of artificial increase in precipitation — this is our domestic development of Roshydromet.

First stage — daily planning, it is necessary to take into account the forecast for the development of sediment-generating processes in the right areas. The forecast is carried out by the Yakut Department for hydrometeorology and environment monitoring. Taking this opportunity, I want to note the high professionalism of the republican specialists, who perfectly know and understand the regional peculiarities of the development of processes.

After analyzing the data, the area of ​​work is clarified and finally determined by the customer — Rescue Service of Yakutia. The work is carried out in areas where a high fire hazard class is recorded and where there are suitable, potentially rain clouds. The planning team strictly selects the clouds — by potential and by the direction where they move, i.e. toward  precipitation should fall not where necessary, but strictly on the target area.

— And what is the very principle of operation of the sounding aircraft equipment, due to which precipitation is caused?

A key role in  the formation of precipitation is played by ice crystals, which either form in the supercooled part of the cloud itself when droplets collide with crystallization nuclei, or fall out of higher located ice clouds. With an insufficient amount of natural ice crystals, we introduce their additional "embryos" — artificial crystallization nuclei, which makes it possible to increase the intensity of the sedimentation process.

In order to introduce artificial crystallization nuclei into the cloud, the equipment installed on the probe aircraft is used. With pyrotechnic products — squibs that contain tiny particles of silver iodide. The crystal structure of these particles is very similar to the  crystal structure of ice, and therefore they collect cloudy moisture on themselves, while growing, when such a crystal reaches a certain size, it falls to the earth in the form of rain. —Sometimes one hears about  that artificial precipitation can allegedly cause floods. How you comment on such statements?

— There is no connection between the operation of the sounding aircraft and rising water levels in rivers not existing.

In July, intense, even anomalous southern and western cyclones were observed in Yakutia, which shifted to the north of the region. The Verkhoyansk region was affected by these cyclones, which led to the occurrence of floods on its territory.

Such anomalous processes have a cycle of approximately 12-15 years. The last similar events in Verkhoyansky District took place in 2008 year.

This natural phenomenon is in no way connected with works on artificial precipitation induction, because flights of sounding planes in northern, northwestern , the north-eastern part of the republic were not carried out. The experiment was limited to work in the central, southwestern and partially southeastern regions of Yakutia.

At the same time, in the working process, we monitored the direction of air masses so that precipitation after exposure would fall in territories with dry weather, and not in the north, where active cyclonic processes took place.

It is also important to understand that intense heavy rainfall is associated with  powerful convective processes, in which cumulonimbus clouds are observed with an upper limit of 12 km and more. In                then then  ” height=”599″ width=”800″ style=”display: block;” />

— When will it be possible to judge the results of the experiment? Can now, when the flights of sounding planes are completed, to sum up some intermediate results?

— On the results of the work, of course, are judged after a comprehensive analysis. But preliminary conclusions can be drawn even now.

The use of active cloud influence technology to prevent an increase in the fire hazard class confirmed its effectiveness. As a result of the experiment, precipitation in places of 2-5 fire hazard classes was increased. The work of laboratory aircraft made it possible to significantly reduce the likelihood of fires in the test areas. In  the central, southwestern, southeastern parts of the republic, where aerial work was carried out, it was almost completely possible to eliminate the occurrence of landscape fires, and also extend the safe period until the first ten days of July.

In addition, as a result of systemic artificial soil moistening in  May-June (the period of formation of grass stand), tall grass plots were obtained on experimental territories, which are used as pastures, and also for fodder.