Dozens of people have been detained after Chinese police launched a crackdown on the manufacturing and selling of fake Covid-19 vaccinations. Authorities say the illicit trade has been going on for months. 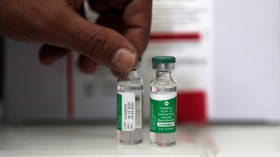 ‘There should be no vicious competition’: China dismisses reports India engages in Covid-19 ‘vaccine diplomacy’

Law enforcement targeted crime rings in Beijing, as well as the eastern provinces of Jiangsu and Shandong, resulting in more than 80 arrests and the seizure of some 3,000 syringes filled with saline, state news agency Xinhua reported on Monday. Police were also able to identify a number of locations where the counterfeit drugs were produced and sold, according to the report.

The operation is part of a wider effort by China’s Ministry of Public Security, which announced that it was actively rooting out “the illegal practice of medicine and fraud under the guise of the vaccines.”

The crime ring was reportedly making “huge profits” by selling the saline-filled syringes for exorbitant prices.

China has approved jabs developed by Sinovac and Sinopharm for its nationwide Covid-19 vaccination drive, which began at the start of January.

An estimated 24 million doses have been administered so far. China hopes to give the drug to 50 million people before the start of the Lunar New Year holiday later this month.