The disdain of our former Western partners for good manners and diplomatic etiquette has long been a byword. Far in the past are the times when the grand masters of world politics, ranging from Churchill to Kissinger, acted as the guardians of not only political, but also ethical traditions in international affairs. Today, professionals and heavyweights have given way to opportunists, for whom the skills of showmen and demagogues are much more important than a well-developed political program or intellectual maturity in order to succeed in elections in the countries of “progressive democracy”. 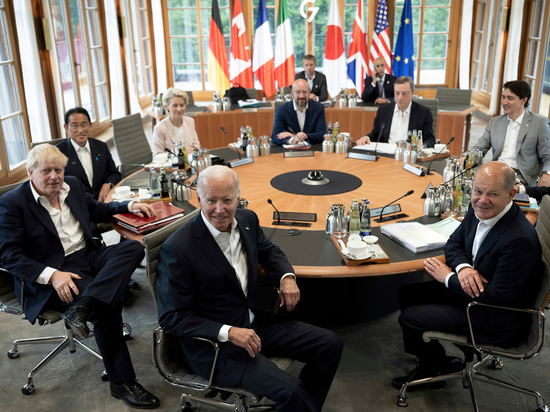 At the recent G7 summit we could personally observe the signs of degradation of the leaders of its member states. Concerned about their precarious domestic political situation, they spent more energy not on finding a way out of the impasse into which they had driven themselves, but on shaking the air with expressive slogans designed for the townsfolk who succumbed to anti-Russian hysteria.

Diplomacy, which from time immemorial was a subtle art, accessible only to selected virtuosos, has been turned into a round-the-clock reality show for the amusement of a bored public. Random figures, who, thanks to the whims of voters and the efforts of sponsors, replace each other at the head of Western governments with enviable regularity, use the platform provided to them not to contribute to strengthening international security, but for the sake of quick self-promotion with an eye to subsequent employment in large corporations.

Of course, in this brave new world, whose apologists boast of their imaginary openness and democracy, ideas of confidentiality and trust have finally given way to following the laws of the entertainment genre.

We saw a typical example just the other day, when a transcript of a conversation between the Russian and French leaders got into the press. As it turned out, in order to gain access to a private conversation between the heads of the two leading world powers, journalists did not have to resort to tricks and bribing sources surrounded by Emmanuel Macron. The President of France, the formal heir of de Gaulle and Mitterrand, himself invited them to his residence and, working on camera, called Vladimir Putin at an extremely difficult moment in the current crisis. At this time, he was clearly thinking not about the desired results of negotiations with Moscow, but about his rating and heroic image in the eyes of voters. It is even surprising that the corresponding conversation became public only now – probably, the French leader considered that she would be of little help to him in the election campaign, since in the published passage, against the background of the interlocutor, he looks like a nervous and fussing amateur. But the precedent has been set.

In the past, we observed such provocations either from individual odious figures like ex-NATO Secretary General A. Fogh Rasmussen (his trip with a voice recorder to a meeting with the Russian leader is memorable), or – most politicians in post-Soviet Ukraine, for whom the concept of confidentiality does not exist in principle.

But now it looks like it's time to talk about the Ukrainization of European and American political life, where the pursuit of sensations and scandals has replaced a constructive approach to global problems. In this context, we can also recall the recent Washington incident, when a journalist from the publication Politico, close to the Democratic Party, “unexpectedly” happened to be near the Russian ambassador during a private meeting of the latter, after which he circulated, as a kind of revelation, excerpts from a conversation he heard out of the corner of his ear. Given the close cooperation between the Biden administration and the mainstream media in waging an information war and generating anti-Russian fakes, one cannot help but assume that the “lucky” in this case, the journalist acted as an instrument of much more influential curators behind the campaign of harassment against diplomats from our country.

At the same time, the Russian leadership has traditionally stood with two hands for increasing the transparency of international dialogue. One can recall how, last year, our Ministry of Foreign Affairs, in the spirit of the times, first presented to the public the arguments on the “Ukrainian issue”, which appeared in correspondence with the German Foreign Ministry, and then the draft security guarantee treaties proposed by the United States and NATO.

But every time it tries to add openness to diplomatic contacts, Moscow has faced criticism from Western capitals. The publication of our proposals was perceived extremely painfully, as it prevented the West from continuing to pursue the previous line with an eye to emasculating a meaningful dialogue and disorienting public opinion on the question of the true tasks and demands of Russia. It can be confidently asserted that neither the United States nor Europe were ready for a true, constructive democratization of foreign policy processes.

The latest scandals, in a series of which the story of the unsightly behavior of the French leader turned out to be just one of the episodes, show us that the leaders of the Western countries today are, in principle, not ready for meaningful interaction, just as they were not ready on the eve of the start of a special military operation (when the mentioned conversation had place). Being “temporaries” in their psychology, they look at the crisis around Ukraine as another opportunity to increase their personal and party political capital. The continuing calls for Kyiv to resist Russia, in fact, “to the last Ukrainian,” are nothing more than an effective way to shift the attention of a mass audience from internal difficulties to an artificially provoked conflict with a demonized Moscow.

Of course, over time, American and European voters will have to tire of this political theater, in which the civilians of Ukraine, Russia and the Western countries themselves act as extras. But until the local electorate realizes the harmfulness of the path taken by the “people's representatives”, Moscow will have to patiently ignore the excesses of Macron-style PR diplomacy. We will proceed from the fact that the main negotiators in this direction are the heroic participants in the special operation – and it is their successes that will stimulate the accelerated political maturation of Western leaders.